Sunell NVR DVR FAQ
How to Find The Encryption/Verification Code?
How to configure RAID? DVR NVR

When designing an indoor video surveillance system, a common issue involves the control of corridors. The main task involves monitoring the movement of guests and personnel. This monitoring activity provides valuable data regarding the time and pattern of movement of the people being observed which can be used if post-incident analysis is needed.

Consider the length and width of the corridor, ceiling height, and presence of possible obstacles (doors, items of furniture, etc.).

Let’s start by clarifying a few points that are essential to solving the problem.

How to install CCTV cameras in corridors

The objective of surveillance is to recognize a familiar person

CCTV systems are used to fulfill different tasks. Some of these are defined in national and international standards, such as in the EN 62676-2015, which deals with the tasks of identification, recognition and detection. 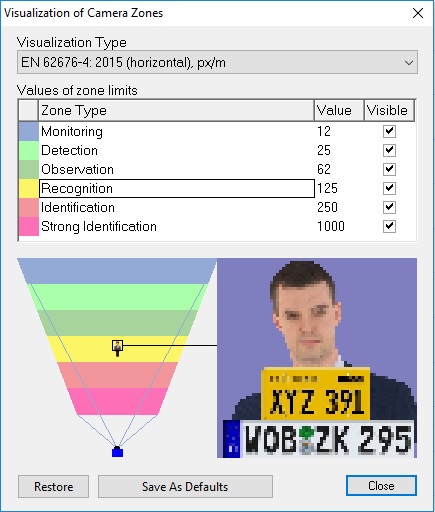 For corridor monitoring, a normal detection setting is 125 pixels per meter, since identification is handled at the entrance to the building and simple detection is not enough for post-incident analysis using the video surveillance archive.

The dead zone under the camera

No matter how small the corridor is, it is impossible to eliminate single camera “dead zones” (i.e., zones that are not in the camera’s field of view). 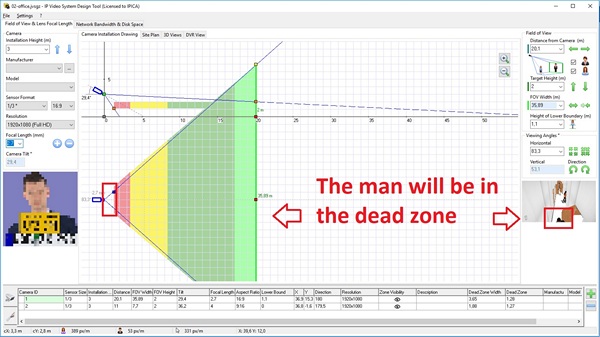 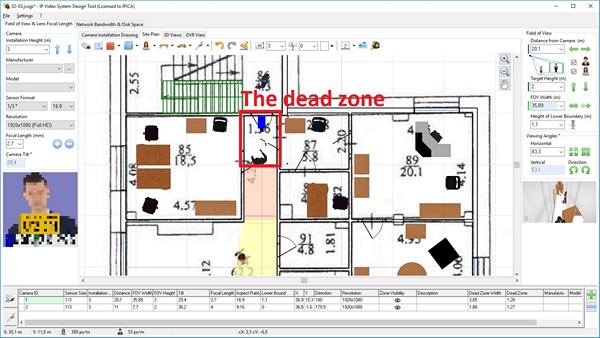 This person in the foreground will eventually step into a “dead zone” and disappear from the camera’s view. Therefore, we cannot guess from this camera whether he will proceed forward through the door to the staircase or turn right to the door of the office. 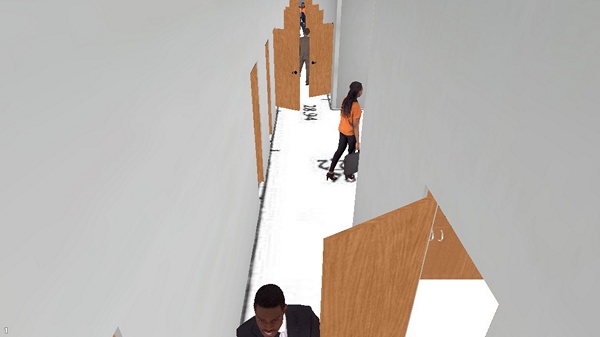 We’re generally not interested in the entire image delivered by the surveillance camera. Rather, just the most important aspects, including the observation targets, their recognition, time of appearance on camera, and their further actions. The rest is simply background noise that loads the network equipment with extra traffic and wastes hard drive and archive storage system space. Compare the informational capacity of two images: 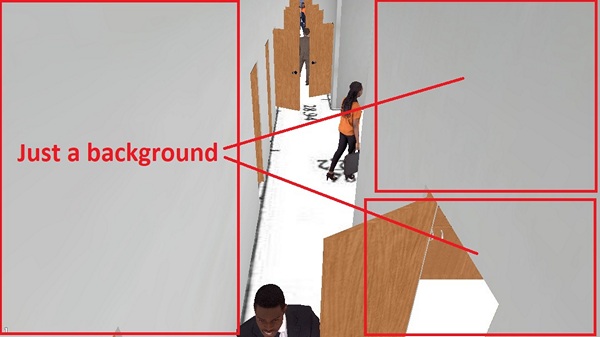 These images come from the same camera. The difference is only in the frame format: 16:9 or a frame rotated by 90°, resulting in an aspect ratio of 9:16. This function is supported by a limited number of cameras and video management systems (software controlling and recording video from surveillance cameras), but it is essential for monitoring corridors. It’s commonly known as corridor format or corridor mode.

Keeping in mind that all cameras have a dead zone and that we’re not interested in walls when monitoring a corridor and trying to recognize individuals along the entire length of a corridor (that is, recognizing individuals who we know personally or whose close-up has been registered at the entrance to the building), we can begin to set up our surveillance cameras.

For a small corridor, the method of installing cameras at opposite ends facing one another generally works well. This allows you to monitor the entire length of the corridor using only two cameras. Depending on the length of the corridor, you should select the optimal focal length that allows recognition of a familiar person, described in EN 62676-2015 or similar standard, throughout the entire corridor segment. 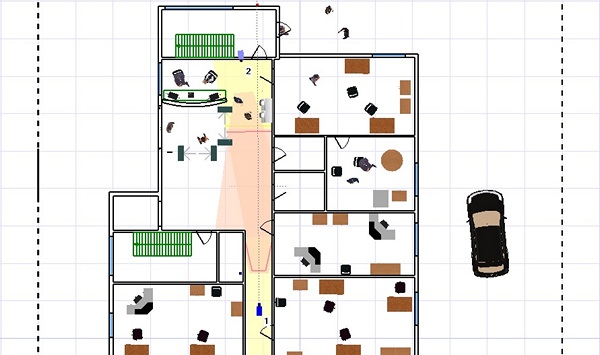 The camera resolution should be set so that it’s at least minimally sufficient to perform the job at hand. 1.3 or 2 megapixels are generally satisfactory, but a resolution of 4 or 5 MP (or more) may be necessary for longer corridors. That said, it’s necessary to keep in mind lower light sensitivity (the ability to “see” in dim lighting conditions) and ensure sufficient lighting.

Pay attention, as well, to the fact that obstacles (in our case, 2 ATMs) can obscure the field of view. Apart from the above, the corridor may contain additional areas of interest that need to be controlled by individual cameras: 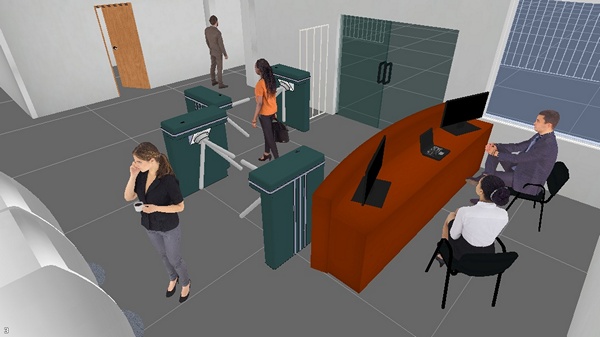 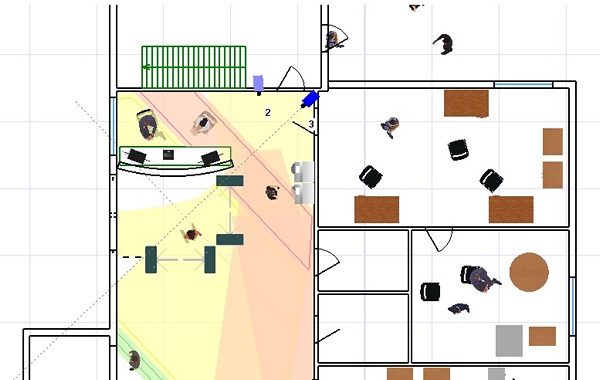 In this particular example, it’s not optimal to control the zone in front of the ATM by the “corridor” cameras. A more effective solution would be to install a separate camera with a wide-angle lens in the immediate vicinity of the ATM.

For longer corridors, the camera placement method might be similar, but you should keep longer-focus lenses in mind, selecting them as necessary. 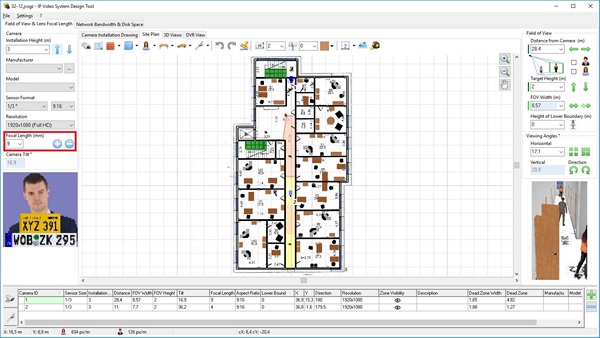 In some cases, it’s better to use the “piggyback” method, in which one camera looks at the “dead zone” of the next one – a typical setup for protecting extended perimeters. This kind of setup allows the video surveillance operator to better survey the area. Noting the mounting direction of each of the cameras on the floor makes them much less complicated to monitor. 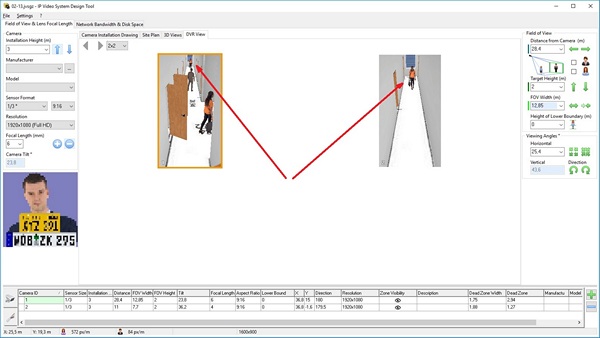 However, this method, in its original form, is not optimal for long corridors due to the presence of “dead ends” and the fact that there is nobody to watch over the “dead zone” of the first camera: 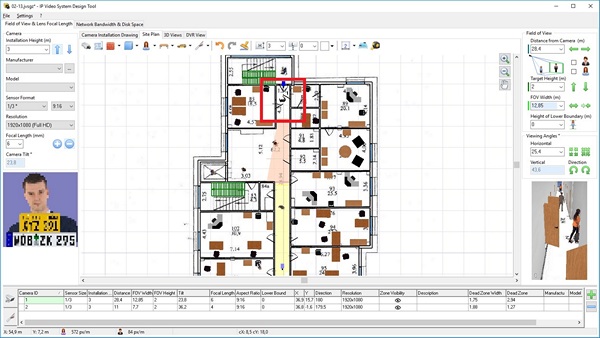 Subscribe to receive inspiration, ideas, and news in your inbox

Lorex – How to reset the password DVR NVR All Model

How to use VPN on Milesight Network Camera 0

Jordi Espin: I need updated firmware for the NBD8908T-PL-XPOE Thanks very much.

Laci: After 2022. summer, Google disable this function. How can i set up for send email?

A SIMPLE GUIDE TO IP CAMERA INSTALLATION AND CONFIGURATION 38

Yoosee – What to Do If The App Says Wrong Password? 2

How to install Mirasys VMS (Video) 2